BACK TO MAGAZINE
HOME / THE ARTISTS' BLOG / In the name of the father, the son and Picasso
Blog

In the name of the father, the son and Picasso

About the double exhibition held at the Musée Picasso-Paris from 16 April 2022 to 1 January 2023.

The time has not come when we will not know what to say about Pablo Picasso! This time, an exhibition at the Musée National Picasso-Paris is devoted to his daughter Maya. This ray of sunshine born in 1935, a year before the outbreak of the Spanish Civil War, illuminated a period that was as dark for history as it was for the artist himself, who for a long time had to hide the existence of this little girl and her mother, the very young Marie-Thérèse Walter. It must be said that the devourer of women was already married to Olga Khokhlova, Paul's mother, and that Dora Maar was also about to enter his life. Not easy... but not traumatic for the minotaur. At least not to the point of spoiling the pleasure of being in love, of being recognised on the art scene and of being a happy father, who loved these little people full of life and future who fascinated him, who abhorred old age, illness and death," writes Manuel Jover in Connaissance des Arts. 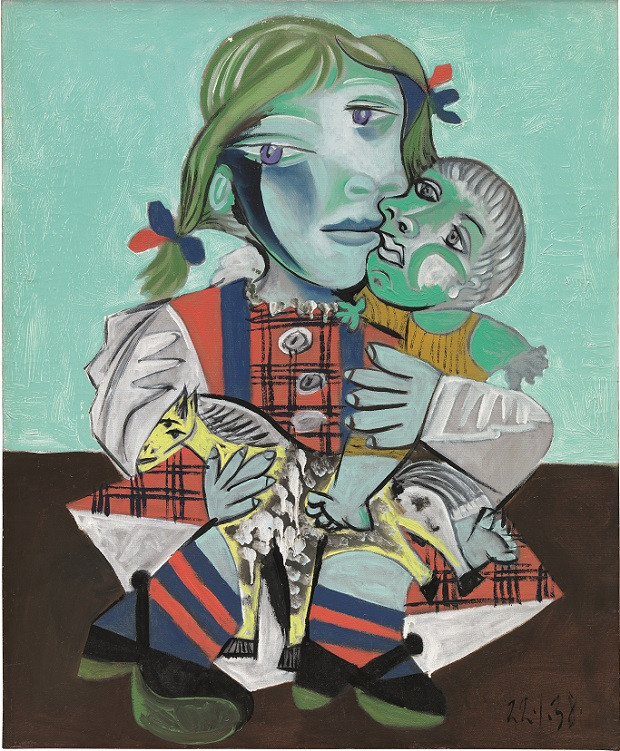 The journalist chose to study for us the joyfully coloured work of art entitled "Maya with a doll and a horse", dated 22 January 1938. It is by the same painter who painted Guernica in May of the previous year, in response to the terrible massacre perpetrated by German planes allied with Franco. At the age of 3, the little girl, whose real name is Maria de la Conception, holds her two toys so tightly that the doll's profile merges with hers. An intertwining that undoubtedly expresses her desire to have a child of her own, as Manuel Jover analyzes, but which also expresses her fear. The need to reassure herself in the chaos of the world. And of her world. The horse, surely made of wood, rests on her lap and completes the jealously protective embrace.

By combining profile, front and three-quarter views, as usual since his cubist beginnings, Picasso gives an account of the formidable mobility of Maya's face, whose gaze, so blue, does not remain in place. The hidden little girl, perfectly recognisable, did not come to pose in the studio on the rue des Grands-Augustins in Paris. That is the "official" life of the married man. The art dealer Ambroise Vollard therefore provided his star painter with an old farmhouse at a distance from the capital, near Montfort-l'Amaury, in Le Tremblay-sur-Mauldre, where Maya and her mother met him regularly. In January and February of that year, 1938, the playing child was the subject of numerous paintings and drawings by her father, who liked nothing better than to sketch her from life. There are several versions of Maya with her horse and doll, which can be seen today in the Picasso Museum, with her hair tied with ribbons, her striped socks and her dresses with motifs reminiscent of the paper collage technique. The artist also depicts her daughter in a sailor's outfit with her little sailboat.

Entitled "Maya Ruiz-Picasso, daughter of Pablo", this is perhaps the most moving part of this new exhibition, since it is ultimately devoted to Maya's relationship with her father, who painted and drew her from the age of three months until she became an adult. But in the second part entitled "New Masterpieces. The Maya Ruiz-Picasso donation", it is also touching to discover the impressive portrait of Don José Ruiz. This time Picasso is the child.