The tribulations of a beautiful Roman soldier frozen for eternity

About the exhibition at the National Archaeology Museum of the Roman face helmet visor discovered in Meurthe-et-Moselle.

Archaeological works of art carry a very special emotion, as they tell the story of a civilisation that is both close to and far from us, with an uncommon aestheticism. Such is the case with the famous visor from Conflans-en-Jarnisy (54), moulded on the face of a Roman soldier from the 1st century AD. The young cavalryman, who was probably stationed on the Roman road leading from Trier to Lyon, certainly did not imagine that his graceful features would be admired in the 21st century! So why is this incredibly beautiful copper visor, found in 1908 during excavation work and documented in 1911 by Paul Perdrizet, a member of the Lorraine Archaeological Society, being exhibited to the public for the first time? 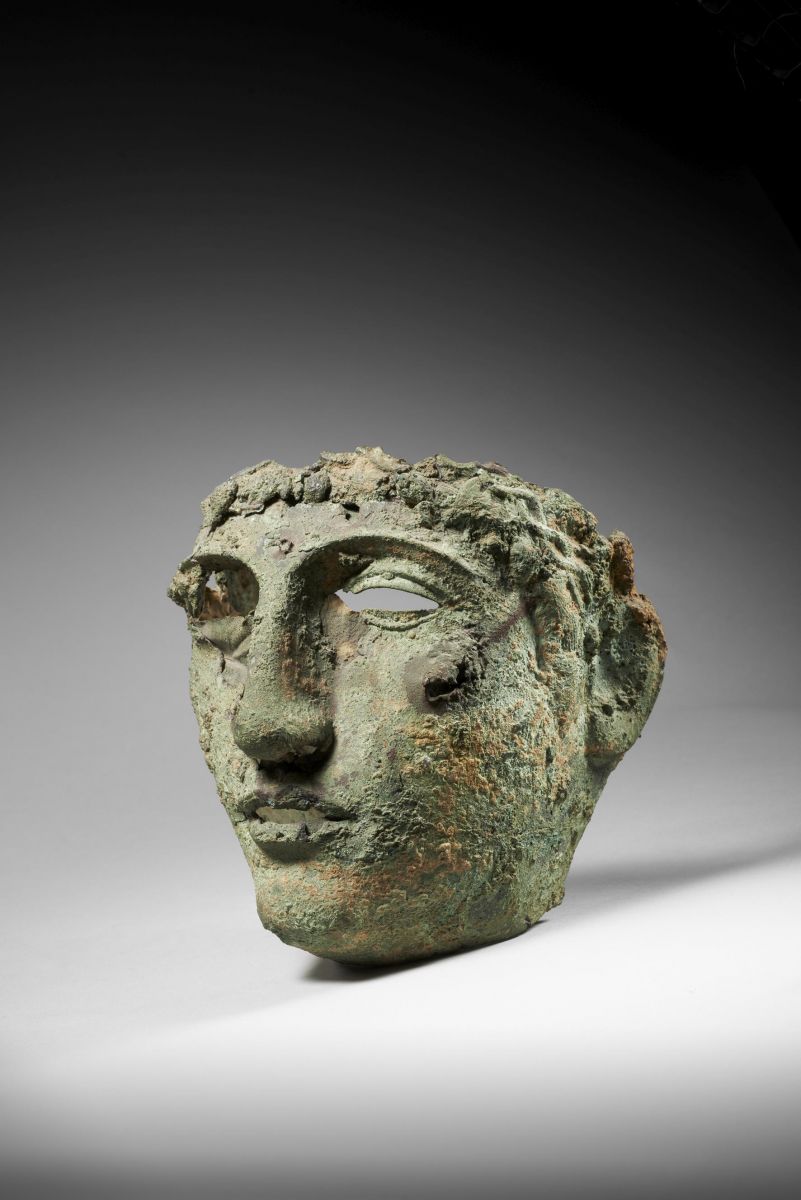 Due to a combination of circumstances, it was not until 2019 that this exceptional piece finally entered the national collections, at the Musée d'archéologie nationale (MAN), where it is displayed in majesty until 9 May.

Incredible as it may seem, the museums did not want it when it was offered to them in 1919 by the descendants of Dr Coliez, at whose home it had landed in Longwy after having been exhumed during the construction of a shop on the road leading from Conflans to Jarny, in Meurthe-et-Moselle, not without having previously terrified the cook of a retired officer. At least, they did not want it at the price they asked. The MAN offered them 5,000 francs at the time, whereas they were asking for 21,000.

Never mind, the visor stayed in the family until better times came. Those days came in 1941, in the middle of the Occupation, in the form of a small advertisement: the writer Henry de Montherlant, always in search of aesthetic perfection, was looking for antique pieces to add to his personal collection. He bought the visor from them for 50,000 francs, but not without checking with the Royal Museums of Art and History in Brussels to ensure the quality of the work of art. Six years before his election to the Académie française, the writer can be seen presenting it in a video archive from 1954 made available on the Beaux Arts Magazine website: he is very proud of his acquisition! So much so that he announced that he wanted to be buried with it...

One can imagine the commotion in which Montherlant's suicide in 1972 plunged the small world of archaeology... Will this exceptional piece, in an exemplary state of conservation, really end up buried again? Fortunately not, the illustrious writer was finally cremated. But despite the press campaign and the ministerial intervention that led to this outcome... it is still not a happy ending! The "Mask of Montherlant" then disappeared... and only reappeared in 2017 in a sale at Artcurial dispersing the writer's collection of antiques. Among the works of art for sale was the Conflans visor. Estimated at between 60,000 and 80,000 euros, it was bought for 117,000 euros... by a foreign individual! This time the State intervened and refused its expropriation passport by classifying it as a national treasure.

However, it will take the financial support of the La Marck Foundation under the aegis of the Fondation du Luxembourg for this 19 cm high warrior visor, made to measure in the 1st century AD, to join the collections of the MAN in 2019. will join the collections of the MAN. The beardless face of the young man is topped by a band of curly hair and a plant crown, which X-rays have revealed.

The scientific study carried out with the Centre de Recherche et de Restauration des Musées de France (C2RMF) provided information on the restoration options. The scientific imaging and physico-chemical analysis work is a special opportunity to present the investigations carried out in the laboratory to the general public in a concrete manner. Hence the exhibition "Face à face - Visière d'un cavalier romain" (Face to face - Visor of a Roman horseman) which has been on display since 22 January and will continue until 9 May 2022 in the temporary exhibition room of the Musée d'Archéologie nationale in Saint-Germain-en-Laye (78).