A painter to be followed to the letter

For Agnès Thurnauer, words are images, images are words, and all her work is language in space. See those giant, colourful badges that make famous artists change their gender? That's her. Among other works of art. A big success in 2009 at the "Elles@centrepompidou" exhibition, her famous "Life-size portraits" presented us with Annie Warhol, Francine Picabia, Eugénie Delacroix or Louis Bourgeois in typographic form... to the point of almost making us forget the rest of the work of this Franco-Swiss artist born in 1962 in Paris. She has always put her foot down when it comes to painting, even in times when the medium was no longer popular, but not at all.

However, she was not above a creative contradiction and chose to study film when she enrolled at the Ecole des Arts Décoratifs, from which she graduated in 1985. She had been painting since the age of three, but no doubt preferred to pursue her work as a self-taught artist, and above all far from the rules of the contemporary art market. And when the Palais de Tokyo, a temple of contemporary creation that was particularly hostile to painting at the time, gave her the opportunity for her first solo exhibition in 2003, she did not hesitate... and presented only paintings! This boldness paid off, as "Les circonstances ne sont pas atténuantes" was a great success, and made Agnès Thurnauer's work known as thwarting all codes, abolishing the boundaries between abstraction and figuration, reconciling the sensitive and the conceptual... In short, the whole package!

She initiated her "History Paintings" in 2005 at the Lyon Biennial. A text occupies the entire space of the canvas on which she paints the characters, often female, of paintings as famous as Manet's Olympia or Suzanne Valadon's La Chambre bleue. But she soon tackled subjects with an even more directly political scope, such as her series of large paintings "Land and Language" in 2016, built on a framework of words written by the English poet Rod Mengham, inspired by current events and crossed by a diagonal of gestures of solidarity by men and women crossing borders.

For Agnès Thurnauer, writes Anne-Charlotte Michaut in this month's L'Oeil magazine, "language is a material". Since words are, according to the artist, "living organisms", "pockets of meaning", she sections them on diptychs, in her "Prédelles" series, to better reveal all their semantic and symbolic potentialities. "On the surface of the canvas, the scriptable is there as a space, in the same way as the shapes, colours and figures", says the artist. Is it because she grew up with a brother who did not speak that the question of language is omnipresent in Agnès Thurnauer's work? Perhaps. In any case, her interest in the functions of language that go far beyond simple communication is not new.

Since 1998, the artist has been experimenting with everything in her studio nestled beside the railway tracks in Ivry-sur-Seine. A place she refers to as "her cave". A place of her own. Where she writes her studio diaries, the first part of which was published in 2014, and the rest will soon be published. Because, of course, she writes as she paints. As she breathes.

A place where she needs the constant presence of at least one trace of all her pictorial and sculptural series to feed her inspiration. A series called "Mapping the Studio", begun in 2003, bears witness to this privileged relationship with the studio. For her, the studio literally represents a kind of assistant, with whom she "co-produces" her contemporary artworks in a practice that is as much conceptual as instinctive. 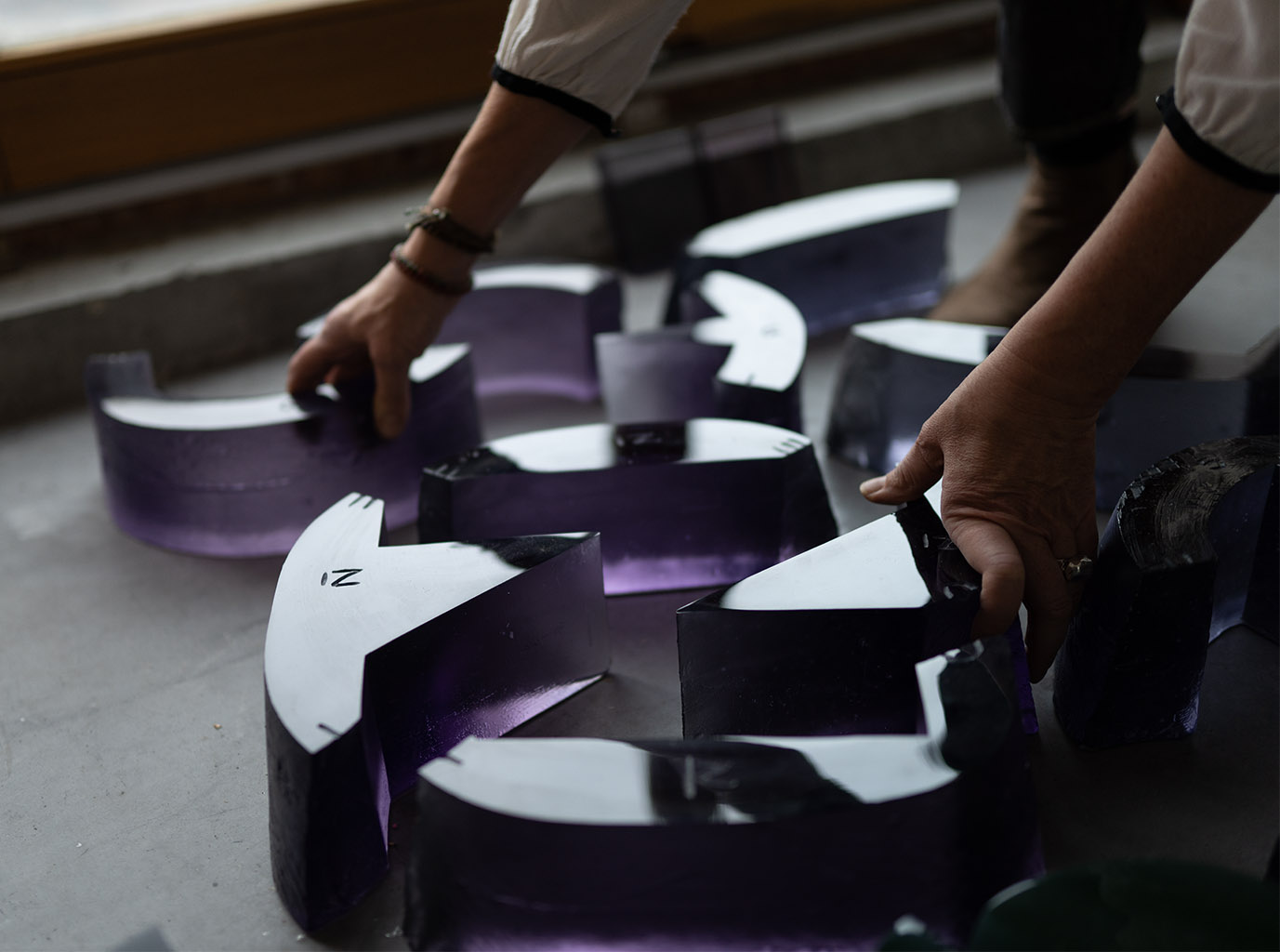 Basically, Agnès Thurnauer lives in words. Because since 2012, they have been coming out of her canvas! With the "Matrices" project, her pictorial work now extends and spreads, and writing becomes sculpture. The opening piece of the exhibition "A comme Boa", which is currently dedicated to him at LaM, the Lille Métropole Museum of Modern Art, Contemporary Art and Art Brut, in Villeneuve-d'Ascq (59), is a three-dimensional installation that unfolds on the floor. It is entitled "River Tongue", "like a river of language open to the wanderings of the eye", says the artist. Made of coloured glass, it was designed to dialogue with "Spanish Still Life, Sol y sombra", one of Picasso's first paintings in which he introduced words, belonging to the LaM collection. But the monumental "Matrices", with their fragmented, sunken letters forming an alphabet of different sizes and materials, are also to be found elsewhere in the exhibition, not far from some "Prédelles". All of this is set in an immersive sound system that literally offers the visitor the chance to inhabit the language as well as the space. For Agnès Thurnauer, this is a real invitation. For she is convinced that to inhabit language is to open up to the other.