About the exhibition "Débordments, Pablo Reinoso" at the Domaine national de Chambord (41) until 4 September.

See this strange spaghetti bench, which seems to never stop growing because it is so wild on all sides? This is Pablo Reinoso. Expressing the force of life by applying the principle of plant growth to matter: this is the approach that drives the artist's work. A delightful and invigorating work, which can be seen at the Xippas art gallery in Paris until 31 July, but also and above all in the middle of nature and in a royal setting until 4 September, on the occasion of an event with the fabulous name that suits him so well: "Débordments". 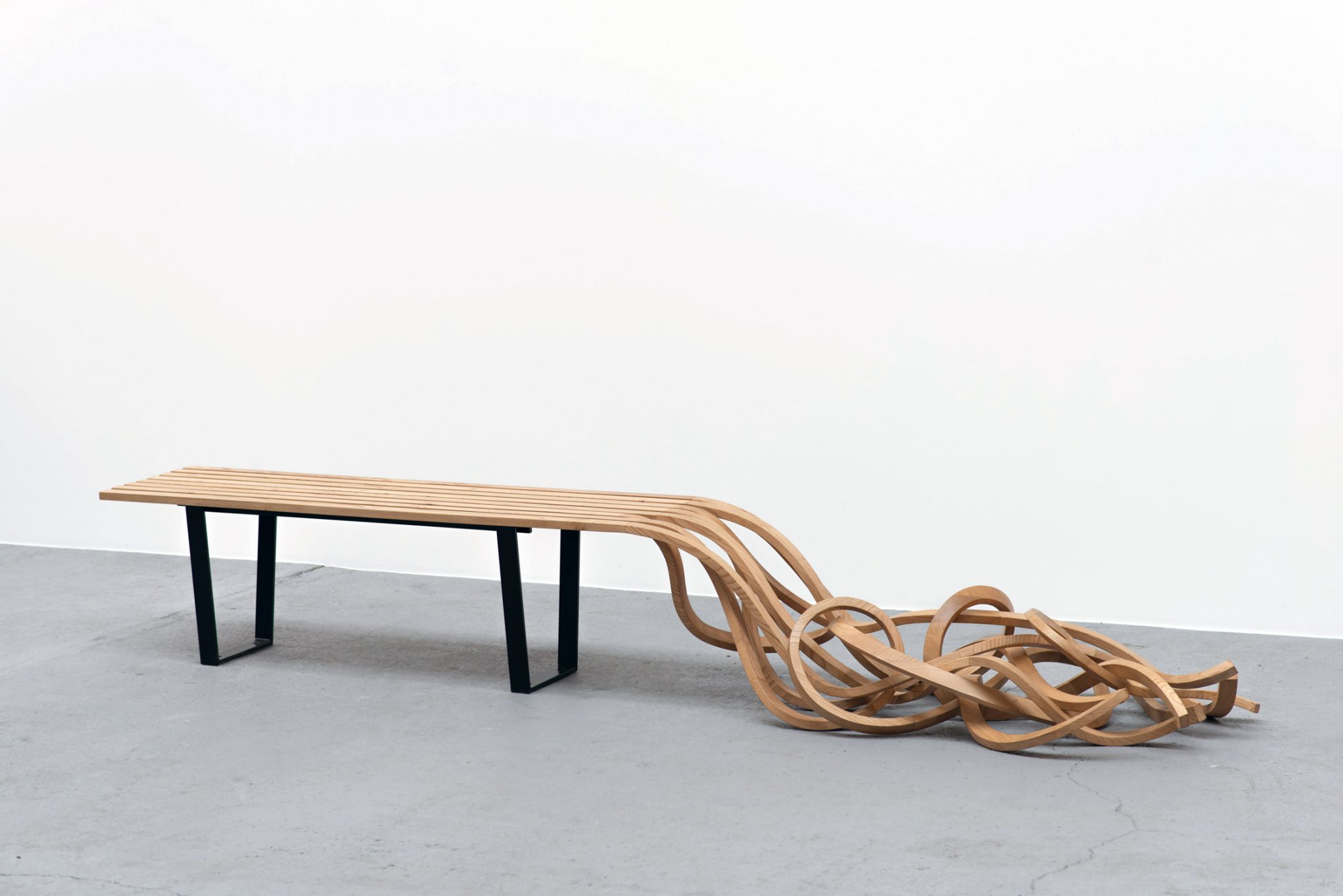 The Looping One - Pablo Reinoso

After inviting him to take up a residency, the Domaine national de Chambord is devoting a major exhibition to Pablo Reinoso, bringing together more than fifty of his works of art. Some of the Franco-Argentinian artist's emblematic sculptures are there, of course, such as the famous spaghetti benches, whose wooden slats become entwined branches and adorn the corridors of the château, but he has also created twenty-three productions especially for the occasion, in total symbiosis with the place, to offer visitors a unique stroll. From the French garden to the majestic vaulted rooms and exhibition halls on the second floor, the tour will take visitors through a representative selection of Pablo Reinoso's works, while marvelling at those inspired by the only royal estate that has remained intact since it was created in 1519 by François I, and which houses one of the largest châteaux in the Loire Valley.

Thus, "Révolution végétale (d'après Léonard)", an extraordinary monumental sculpture in stone and metal, a skeleton of unfolded steps or branches intertwined around a trunk, which rises to a height of 7 m in the garden, was inspired by Leonardo da Vinci's famous double-revolution staircase, offering a graphic vision of the sky when viewed from below. The staircase itself hosts the last avatar of the "Breathing" series in the castle, like the beating heart of the exhibition, a metaphor for the multiple forms of exchange on which life depends. 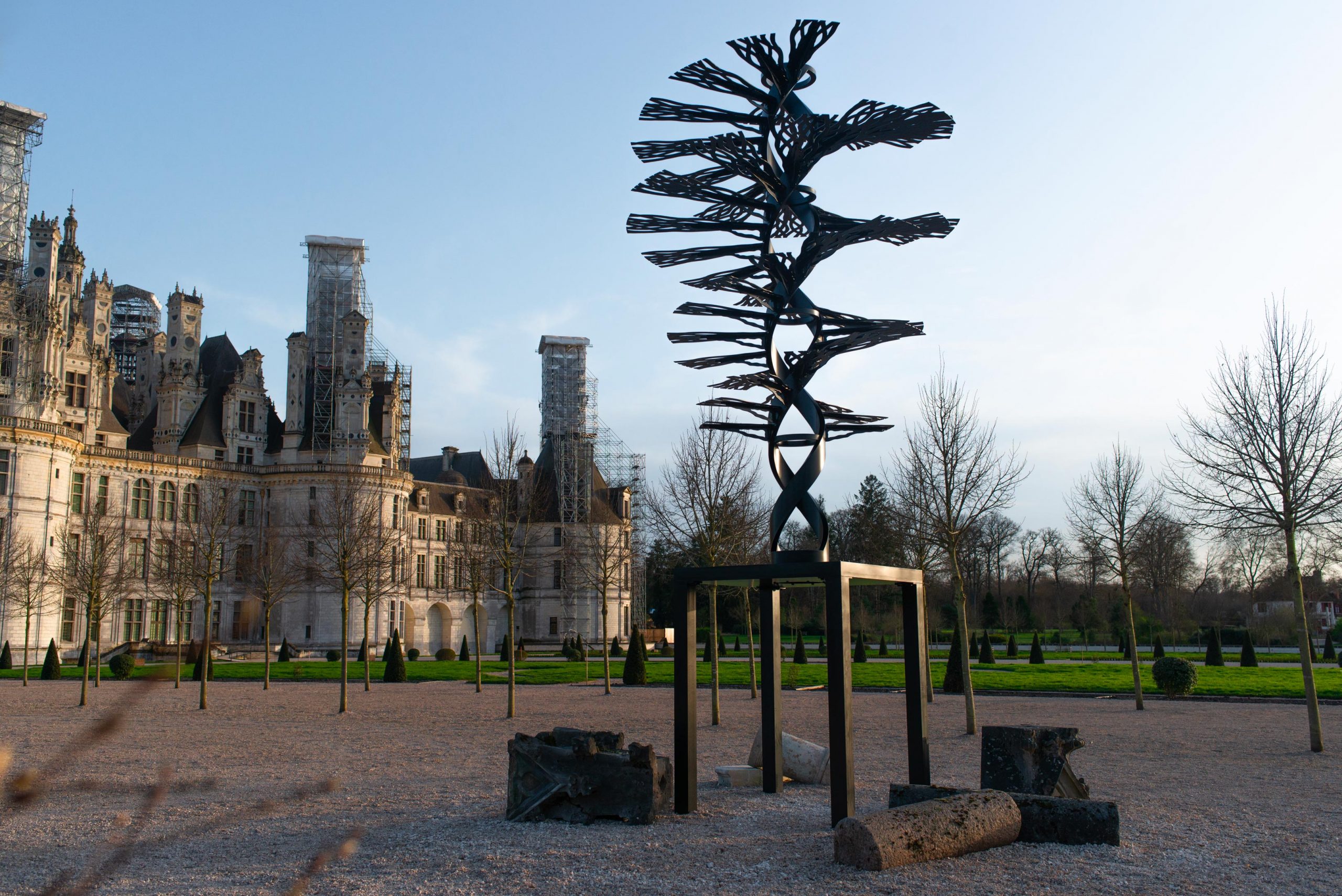 The "Respirantes", the first work of art authorised to take over the architectural masterpiece that legend attributes to Leonardo da Vinci, are indeed "air sculptures", poetic lungs, that Reinoso invented at the end of the 1990s, based on cushions made of hot-air balloon fabric "equipped with small computer fans programmed in such a way that they inflate and deflate with a blower" explains Myriam Boutoulle in her article for Connaissance des Arts. She was less pleased with "Entrelacs", the enlargement of an Indian ink drawing that was supposed to "colonise" the scaffolding of a castle tower by evoking a proliferation of vegetation, and whose effect she found unconvincing. But the practice is new: the artist has been experimenting with ink on paper since the confinement experienced during her residence at the Château de Chambord.

Reproduction, exuberance, arborescence, expansion: these are the words that matter to Pablo Reinoso. Principles borrowed from wild nature, "which have always followed me and which correspond to this kind of exaggeration that characterises me", stresses the Franco-Argentine artist, born in 1955 to two psychoanalysts in Buenos Aires, who has been living and working in Paris since he had to flee the military dictatorship of his native country in 1978. Even though his architecture diplomas were not recognised on his arrival in France, the grant he obtained in 1979 to work in marble in Carrara opened the doors to his career as an artist.

He quickly became known and recognized for his multidisciplinary practice, which transforms functional objects from the world of architecture and design into entities in their own right. It's simple: Pablo Reinoso "reverts" inanimate elements. He blurs the boundaries between figuration and abstraction, between interior and exterior, between plant and human, between past and present. He questions our relationship to space and landscapes. To time too. Yes, with him it is certain, objects have a soul.

And if his Spaghetti Benches seem at first sight to revisit with humour and frivolity a basic piece of everyday furniture, they denounce both the meaningless manufacturing processes of contemporary design and the lack of respect for nature and its resources. The wooden slats bend and curl, perhaps to fetch the water we deprive them of... As part of a process of deployment and development, Pablo Reinoso's work is monumental while maintaining a human scale. His installations and sculptures ultimately bear witness to a profound knowledge of the environment linked to our perception of the world, the landscape and space.

"There is a great coherence in all my works, even if their form and appearance may seem to come from different worlds. I have come to realise that, whatever the series, my works produce life, life", the artist confides to the journalist of Connaissance des Arts, who does not hesitate to refer to him as a sorcerer's apprentice or an enchanter, describing the dishevelled chairs designed for gardens and groves ("Mirador"), the wooden "flames" hanging in the chimneys of the château ("Extinguo"), or the dancing chairs in the video "Thoneteando" made with the choreographer Blanca Li. In his workshops in Malakoff, Pablo Reinoso works tirelessly on wood, marble and metal with his team. And suddenly everything proliferates.

"I always work as if nature was taking over," explains Pablo Reinoso, who also released the growth of the boxwoods at the Château de Chambord for his "Débordments". He who, as early as 1982, was able to imprint the movement of the wave on a black marble surface with "Paysage d'eau", and who, twenty years later, with "Ashes to ashes", successively tipped the parquet floor of a house with its furniture over onto a wall and the ceiling in a 360° rotation, was not likely to let the groves fall into line!