About the exhibition "Hockney-Matisse - A Paradise Regained", until September 18 at the Matisse Museum in Nice, as part of the Biennale des arts.

The impression of reliving "Verve", or "Jazz", in the digital age: this is what Claudine Grammont, the director of the Matisse Museum in Nice, furiously felt one day when she found herself sheltered from the rain in David Hockney's Norman studio. The infinite variations of landscapes imagined by the artist during the confinement captivated her, as they had captivated all the visitors of the Orangerie, in Paris, from October 2021 to February 2022, while they were presented in their entirety in the form of a frieze 80 m long echoing Monet's Water Lilies.

But Claudine Grammont was not content to be captivated. She had no more doubts: it was absolutely necessary that the paintings of the English painter, now 85 years old, officially dialogue with those of the French artist who had passed into posterity. Thus was born the exhibition in full swing until September 18 in Nice: "Hockney-Matisse - A Paradise Regained", as part of "Nice, City of Flowers", the 5th edition of the biennial arts festival that rivals with beautiful artistic initiatives: we will not forget that the city is a candidate for the title of European Capital of Culture in 2028.

Seventy pieces from the personal collection of the David Hockney Foundation in Los Angeles are now sharing the stage with the Matisse Museum's completely revamped collection. Paintings that are finally in dialogue "officially". Because unofficially, and in fact, the work of Henri Matisse (1869-1954) has been exchanging for a long time with that of his younger brother, David Hockney, who even declared that he had painted his house in Los Angeles "in the colors of Matisse". And who never hid the fact that he was inspired by all the great masters of modern art such as Monet, Van Gogh, Picasso, Dufy... or by ancient art, such as Fra Angelico, Jan Van Eyck or Piero della Francesca, his reputation as a qualified art historian is well established!

Admirer as much as disciple of Matisse, without ever having fallen into naive imitation, the painter born in 1937 in Bradford, however, has finally chosen the sky of Normandy, by settling in 2019 in the small village of Rumesnil, near Caen, when the master of Fauvism born in Cateau-Cambrésis, in the North, had in his time chosen the light of the South, casting his lot with Nice in 1917, to live there until his death. Natacha Carron-Vullierme, the journalist from Beaux-Arts Magazine who devoted an article to the exhibition "Hockney-Matisse - A Paradise Regained", points out that "shadows persist in most of the Matissian environments", while Hockney's paintings explode with "their light, summery and luminous tones".

For her, "Matisse taught him (Hockney) color, the sketched line, and the return to the inverted perspective of the icon, which allows a subjective relationship, at the cost of abandoning realism, with the portrait or landscape reappropriated by the gaze. By evoking a little further the way in which Matisse and Hockney express their common feeling of well-being, by deliberately offering it to the "generous sharing with others" by suggesting it without ever lapsing into abstraction, Natacha Carron-Vullierme opens the door to a vast subject: is the figurative more generous than abstraction? A work of art where one can distinguish features, forms, characters, is certainly simpler to apprehend by the viewer who can find himself there. Its author thus seems indeed to show generosity since he delivers his feeling without modesty. But it is indeed his own feeling. So when the subject can be interpreted in a thousand other ways because it is melted in lines, forms and abstract colors, is not art all the more generous because it does not impose any constraint? Vast debate...

Anyway, Matisse and Hockney seem to begin by dreaming what they look at. After having learned to see an armchair or a chair, they can then "magnify them, even pose them in majesty, such as the Fauteuil rocaille, painted by Matisse in Vence in 1946. His younger brother prefers to use the chair to suggest the human presence without showing it. And what about Matisse's open windows that take the gaze outside by making, as the painter said, "that the boat that passes lives in the same space as the familiar objects around me, and (that) the window wall does not create two different worlds. 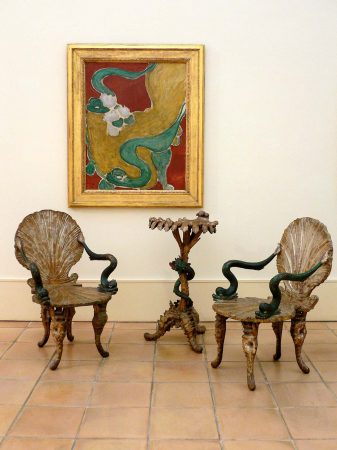 Drawings with a refined line, landscapes inhabited by movement, luminous colors, the inclusion of certain parts of their bodies in the canvas, the desire to paint the peaceful and to rediscover a child's look, the occasional but not obligatory intervention of models, certainly more often male in Hockney's case and female in Matisse's... the two painters show an obvious filiation. And above all, as Natacha Carron-Vullierme notes, they both belong to the "era of technical reproducibility" of the work of art, according to the formula established by the German philosopher, art historian and art critic Walter Benjamin (1892-1940). And they love it. Yes, they both enjoyed, each in their own time, exploring all the technical possibilities offered in their lifetime to reproduce works of art. More to multiply the creative act than to increase the diffusion of their paintings.

Because the reproduction finally becomes for them a new tool of creation. Like a brush or an extra tube of color that one would be delighted to slip into one's studio. We can see this with the gouache papers cut out by Matisse, who himself considered that some of his reproduced plates were more successful than the originals! He had imagined this technique at the time of the realization of the album "Jazz" (1943-1947), and he never tired of marveling at the aesthetic shock that the reproductions of the edition of 100 copies produced on him. Not to mention his models for the stained glass window of the "Tree of Life" in the chapel of Vence, a true synthesis and culmination of his pictorial research: "saturation of color, purification of line and form".

Obviously, his younger brother David Hockney has seen even more possibilities develop with the advent of digital technology. He had already tried his hand at photography, which he did not consider superior to painting given that a lens is content with a single point of view, hence his "joiners" or photocollages from the 1980s, but also the fax, the computer, the printers ... when the iPad arrived in his creative process. He had already been exploring all possible painting techniques since the 1970s, and he was not about to deprive himself of such a tool!